Sometime ago, I had this idea that I could start a project/startup all live via Google Hangouts and screencast. Every moment I was working on that project I would open Hangouts and share my thinking process, contacts, discussions, coding, etc. This would obviously be stored on YouTube and the user could go back and/or know every day what I was working on and why each feature was the way it was.

It is not the same idea but I believe that behind both ideas lives the same feeling/frustration. Sharing not only the end result (text, photo, code, feature) but also the feeling/process.﻿ 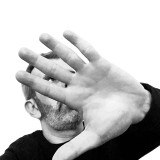